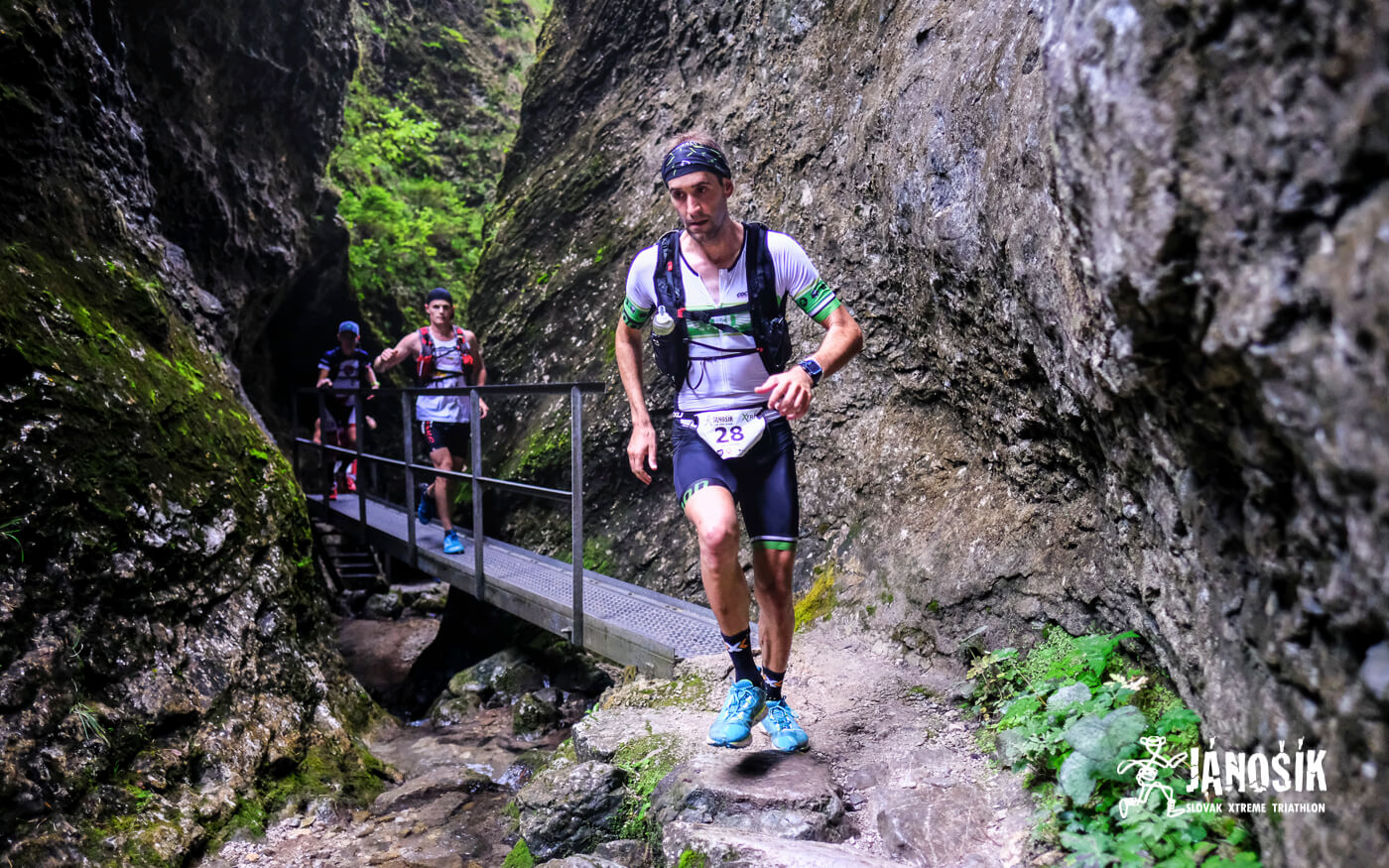 Posted at 08:47h in Uncategorized by Peter Pala

People become legends by pushing their limits in Slovakia

The legend of Jánošík goes back a long time in Slovakia showing him with great jumping ability leaping over high walls or walking through fire, all to avenge injustice by the rich toward the poor.

At the turn of August and September late summer weekend the Slovak Xtreme Triathlon takes place named after JÁNOŠÍK.

At completion of this challenging and beautiful journey, the athletes with their supporters (support team) are awarded by that genuine feeling of pushing their own limits and becoming legends, similar to Jánošík.

JÁNOŠÍK – Slovak Xtreme Triathlon was founded in 2016, inspired by philosophy and values of Norseman, Celtman and Swissman, now being a proud member of Xtri World Tour.

JÁNOŠÍK takes athletes through picturesque regions of northern Slovakia with an overall elevation of 5800 m.

The race starts at midnight with 3,8 km swimming in Orava Dam. Every swimmer is equipped by a lightning buoy, which after a while form a lightning snake on the water surface.

The bike course of 180 km with 2600 m elevation tests the attention and the perseverance of the athletes since the nights are dark and foggy during that part of the year, moreover, the road passes through a hostile, uninhabited and wild wooded landscape.

Early in the morning athletes transition to running course under the statue of Jánošík at Terchová, the base of the race, where all participants can feel and taste the traditional Slovak village.

The marathon with 3200 m elevation takes the athlete and his or her supporter (support team) through Malá Fatra National Park combining very technical trail run with almost climbing sections at Jánošíkové Diery gorge with ladders, or ferrata-like hike to emblematic Rozsutec. The last 10 km pass through a mountain ridge to the finish at the top of Chleb. As the marathon is very challenging and technical, it must be completed during daylight. That´s why the race starts at midnight.

After the whole day the athletes and supporters finally sit down for refreshment at restaurant and the funicular takes them back to Vrátna valley. This memorable day ends with a tasty dinner at Hotel Boboty, the race center.

The final ceremony takes place on Sunday when the winners are awarded “valaška” a traditional poleaxe used back then also by Jánošík.

The finishers receive T-shirts, as usual at the Xtri World Tour races. Since 2020 there will be 2 kinds of finisher T-shirts awarded, the Blue one to those who meet all the checkpoints and cutoffs and the White one to those that fail to meet the cutoff at running course but are brave and determined enough to finish the race at lower finish line.

At the final ceremony  on Sunday first and second men and women (1st place and 2nd place in male and female category) will be awarded with slot for XTRI World Championship in Ejdfojrd, Norway in august 2021. In addition, 2 men and 2 women will be randomly chosen by raffle from the finishers. This 4 athletes will be given a slot for Zalaris Norseman Xtreme Triathlon 2021. The slot is given to athlete, only if he/she accepted it in front of the audience.

Push your limits, become a legend

JÁNOŠÍK – Slovak Xtreme Triathlon can be completed between 13 to 21 hours. In 2019 edition 61 athletes completed the race out of 69 that started. It is extremely demanding, moreover, the weather in Malá Fatra mountains is unpredictable, the pleasant cloudy skies can change easily to thick fog or even thunderstorm on the mountain ridge.

Some news for 2020:
–we are preparing a “white version” of the run course, for those who have problems with catch the stop-times. This run course will skip Veľký Rozsutec and the last 10 km on the ridge. The white course will go around Veľký Rozsutec and than down to Štefanová. White finish line will be at the lower station of the cablelift at Vrátna valley.
-athlete can have more people in his support team. Supporters must be marked with supporter T-shirt or vest. There can be only 1 supporter at T1 and T2. Athlete must have one steady supporter on the run course, that must run the whole marathon. Athlete can be accompanied with another person/s in case that his supporter wouldn´t be able to continue the run. Running without a steady support during the whole run leads to DSQ.
-athlete will be  given only 1 official supporter T-shirt on Friday at the registration (we recomend to order the correct size in advance). In case he wants more T-shirts or supporter vests for his team, there will be possibility to buy them during the registration on Friday.
-blue and white finishers will be awarded on Sunday at the final ceremony.

REGISTRATION starts on November 16th, at 8:00 p.m. and will be open until all 100 slots are sold and paid. Registration page.